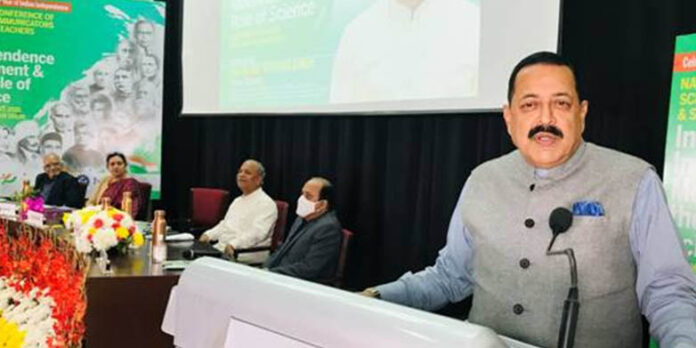 Addressing a national conference for science communicators and teachers organised on the theme of “Indian Independence Movement & the Role of Science”, Dr Jitendra Singh said, India has made a “giant leap” in the field of science and technology in the past seven years under Prime Minister Narendra Modi. He reiterated that India is already on the ascent and science &technology will be the key determinants of the future.

The Minister described Mahatma Gandhi as one of the greatest scientific strategists who, through his weapon of non-violence, waged a scientific battle against British subjugation and aggression. He further narrated that Bapu and many of his contemporaries had also adopted psychological techniques to put the British adversaries on the defensive.

Paying rich tributes to Sir Jagadish Chandra Bose, an eminent biologist, physicist, botanist, and an early writer of science fiction on his birth anniversary, Dr Jitendra Singh said, patriotic fervour exhibited by scientists in imperial India added to the spirit of the nationalist movement. He said, in the freedom movement of our country, we remember the sacrifices and struggles of the political leaders, but on the other hand, our scientists also struggled and opposed the discriminatory policy of British rule.

Dr Singh said that Azadi ka Amrit Mahotsav coinciding with the 75th year of the country’s Independence is an opportunity to remember the science heroes of yore. Saluting the indomitable spirit of Indian scientists, science communicators, and science teachers during the Indian independence movement, the Minister said, we must remember their unmatched contribution as individuals, institutions, and movements that laid the foundation of our present-day Science & Technology.

Dr Jitendra Singh said a vision of “self-reliance” during the colonial era encouraged Indian scientists and patriots to establish their own scientific institutions and industries. Dr. Mahendralal Sircar established the Indian Association for the Cultivation of Science in 1876. Acharya P. C. Ray established The Bengal Chemical and Pharmaceutical Works in 1901 which was the foundation stone of indigenous industry in our country. He said Indian scientists during the freedom struggle emphasized on social harmony, equality, rationalism, secularism, and universalism.

Around 3500 participants joined the conference conducted in hybrid mode (both in person and online), which comprised three plenary sessions by invited keynote speakers and six technical sessions on the theme. The two-day conference was jointly organised by CSIR-National Institute of Science Communication and Policy Research, Vigyan Prasar, and Vijnana Bharati. (India Science Wire)

Study unravels the genome of turmeric

Tata Power and IIT Madras sign a pact to collaborate

Health January 17, 2022 0
Alcohol and drug addiction is a serious problem, and Trucare Trust, India's leading alcohol and drug rehabilitation centre, is assisting addicts in recovering and...

LifeStyle January 15, 2022 0
Today Ravi Gulia has become not only a name but a star, at this age he has achieved a position which was not achieved...

LifeStyle January 15, 2022 0
Sajal Verma has gone on to inspire thousands of people in different parts of the world through his path-breaking journey. However, there is so...

Meet Raveena Tekwani, creating a niche of her own in the world of social...

LifeStyle January 15, 2022 0
She has thrived on her passion as an influencer and content creator in niches like fashion, beauty, and lifestyle. Raveena Tekwani, who considers herself the...

Shiva Suri makes a name for himself in the field of entrepreneurship, encourages others