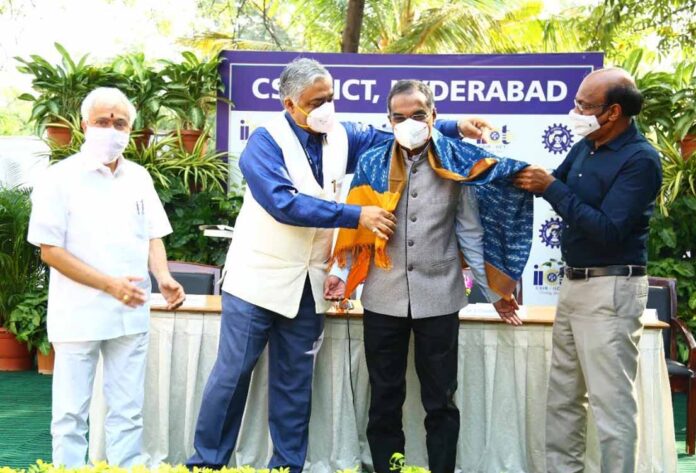 As the culture of the CSIR-IICT is technology-driven, doing so can be transformative, said DrChandrasekhar.He said, he will be available to guide the institute in all its scientific endeavours, and also will strive to make Hyderabad a true science hub of the country. He assured that promotion of CSIR would be an important agenda while he is at the DST, and ensure all scientific laboratories will work closely with DST.

Dr VM Tiwari, Director CSIR-IICT, and staff felicitated DrSrivari Chandrasekhar on assuming charge as Secretary of Department of Science and Technology (DST), New Delhi, during his maiden visit to the institute after taking over.

DrJagadeesh, Chief Scientist at CSIR-IICT, said Dr Chandrasekhar’s works focused on ‘Chemistry for a healthy society’ while his publications are mostly on affordable healthcare and eco-friendly chemistry. His contribution towards the adjuvant for Covaxin has raised the expectation impetus of IICT in delivering answers for societal benefit. He said, CSIR-IICT became popular due to its contributions to the welfare of the society under Dr Chandrasekhar’s leadership.

DrSrivari Chandrasekhar is a recipient of the Infosys Award, and the first CSIR – AV Rama Rao Chair 2020-2023 for exemplary contributions in translational research for the pharma sector. His team was awarded the 2021 CSIR Technology Award for their work on an adjuvant for Covaxin. Dr Chandrasekhar is a Fellow of the National Academy of Sciences, Indian Academy of Sciences, and Indian National Science Academy.

Dr Chandrasekhar’s research highlights his passion and commitment to providing society affordable access to important drugs. Dr Chandrasekhar and his research group developed process technologies for repurposing drugs using indigenous key starting materials for limiting the spread of COVID-19. The technology for repurposing Favipiravir and a process to manufacture Remdesivir was a timely effort at that point of time when there were limited options to treat people affected with COVID-19 in India.

Dr Chandrasekhar’s research publications have been widely used by the industry. Dr Chandrasekhar and his team worked on the synthesis of Bedaquiline, the first drug approved by the FDA after a gap of over 40 years for the treatment of multidrug-resistant TB through simpler transformations and higher yields to ensure ready availability, CSIR-IICT, the statement said. (India Science Wire)

Study unravels the genome of turmeric

Tata Power and IIT Madras sign a pact to collaborate