The Green Urja Conclave 2022 was organised by Confederation of Renewable Energy Service Professionals and Industries (CRESPAI) in association with IIT Delhi, CMEE IIM Lucknow and Hansraj College, University of Delhi.

Union Minister Ashwini Kumar Choubey shared his valuable insights at the Green Urja Conclave on India’s Global Journey towards Carbon Neutrality and the Government Policy to reduce carbon footprints and Global Warming and Indian Strong Commitment to be Carbon NetZero by 2070.

Bollywood actor Darshan Kumar, known for his roles in films like Mary Kom and The Kashmir Files, was the Guest of Honour at the event and had Special Dialogue on “Mass Adoption of EV: Role of Civil Society, Financial Bodies and Corporate Institutions” in a special session with CA Sudhir Kumar Dash, President, CRESPAI and Convenor of GREEN URJA CONCLAVE. Acknowledging that the Bollywood Celebrities, are having huge fan followings must be the torch bearer alongside Civic Societies, we can’t be cost conservative to produce carbon and release toxic to the Air he said while promising the Audience that he will henceforth use and hire EV Vehicles even if it cost him more out of pocket. 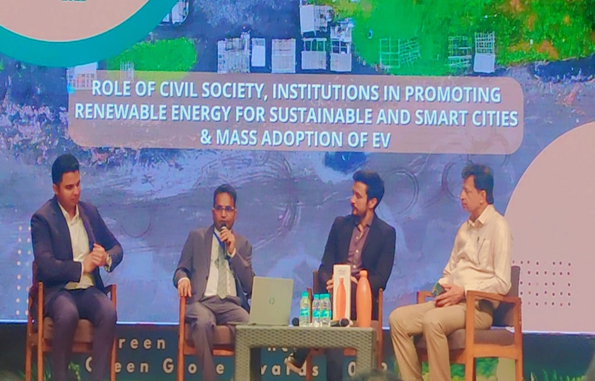 “We all are aware that climate change is a reality and it demands immediate action from all the stakeholders from local to Central government bodies and international organisations. Both the public and private sector institutions will have to share the responsibility towards mitigating the impact of climate change. For sustainable development policymakers, industries and civil society organisations must come together adds CA. Sudhir Kumar Dash, while briefing CRESPAI’s working and agenda to promote clean energy and green environment by providing a platform for all stakeholders, says CA Sudhir Kumar Dash, President, CRESPAI.

On the “Sustainability of Renewable Energy, Mr. Gautam Das of Oorjan Solar, said the Solar energy is no more costly and affordable and must be equated with National Duty of a Citizen. With the Production Linked incentive being pumped under federal policy, India is posed to emerge as the World Leader in generating Energy from Renewable Sources.

On the issues of Depletion of Himalayan Eco-Systems, Challenges and Road Ahead and remedial action for sustainable habitation, Lt. V.G. Khandare, Retd. Hav. Ramesh Baurai while raising concerns about the loss of Mixed Forest to Chir (Pines) said, Government must consider this as National Priority and take strong action. Profession Monika Koul and Dr. Dinabandhu Sahoo, Director of Himalayan Studies, DU, the first scientist of India to have visited Antarctica for climate studies opined Government should invest and encourage investment in growing Aquatic Forest to reduce the carbon emission from mainland.

Session 3: Speaking over a Plenary over this season, reformative action to instill civic behaviour must be done by corporates. The corporate should showcase sensible conduct of doing business in an eco-sensitive way and make their employee as Green Ambassador says Rajneesh Gupta. Director of Guenstiger India Private Limited while speaking to CA. Sudhir Kumar Dash.TO a straight question of what his company has done for carbon check. Mike Mattsen CEO of Mattsen Kumar said at his personal level he has left his mansion in Washington and moved to small house in sea share to coastal. At his corporate level, they have plastic-free policy and they only permit non plastic items to their company. Drawing applause from the audience for his remarks that India is far ahead of US in many areas private public participation in carbon control although many more are yet to be done to make the Globe Green and sustainable habitation.

Yogendra Singh an Internationally awarded cyclist and Director of HighFIve Global highlighted their initiative of the Carbon Minus Allowances to employees who comes to office on cycle. That way the employee not just is reworded with additional cash but also saves hi petrol money and the benefit of good health is an additional bonus.

On the Occasion, CRESPAI Launched the Planet Saviours Army, the civilian volunteers to work in army like manner for the larger cause of Environment and green life habitation. While encouraging more volunteers on Pan India basis, institution campaign at school & colleges, Actor Darshan Kumar, the Goodwill Ambassador of Green Urja said, we must make plantation drive and save a tree, a part of our daily prayer.

For Planting over 3 lakhs of Trees, another Hero, a bus conductor in Tamil Nadu’s Coimbatore city known as the ‘Tree Man’, Marimuthu Yoganathan received the Green Globe Award for distributing sapling to each passenger of hi bus for the last 30 years.

Dr. Dinabandhu Sahoo, the Professor who left his Vice-Chancellor Job to follow hi passion. The Passion to research Carbon Sequestration, Biofuel Production from Algae, Marine Biotechnology and Marine Environment, Application of Science & Technology for Societal Benefits. The Developer of “World’s First Carbon Capture Vehicle”. The First Indian Researcher in Antarctica, The Recipient of Young Scientist Award. The Author of Dozens of Books, on Environment, Ecology, Marine life received the Green Globe Award for lifetime contribution to ecology and environment.

“Bharat Mahotsav” Festival of One India at London 2022